Skip to content
Paragon RFID > News > The history of NFC
According to a recently published research study, the Near Field Communication (NFC) market is expected to reach $24 billion by 2020. This is unsurprising news as the mobile phone market continues to grow. It is forecasted that, in 2017, over a third of the world’s population will own a smartphone. That’s 2.6 billion smartphone users worldwide! It is also estimated that by 2018, 1.9 billion phones worldwide will be NFC-enabled.

Endless opportunites… what is NFC?

Near Field Communication (NFC) enables two electronic devices, one of which is usually a smart phone, to interact with each others when brought in close proximity – about 4cms.

NFC is widely used for contactless payment and exchange of digital content but its applications are endless. The technology is increasingly used in security, access control, gaming, brand protection, marketing and customer engagement. NFC is a unique technology, very secure, difficult to forge, and it provides an outstanding customer experience.

Where did it all start?

RFID – the technology on which NFC is based – is rumoured to have been created during WWII. It was, however, officially invented in 1983 by Charles Walton when he filed the first patent with the word « RFID ».  NFC started making the headlines in 2002 and has since then continued to develop… 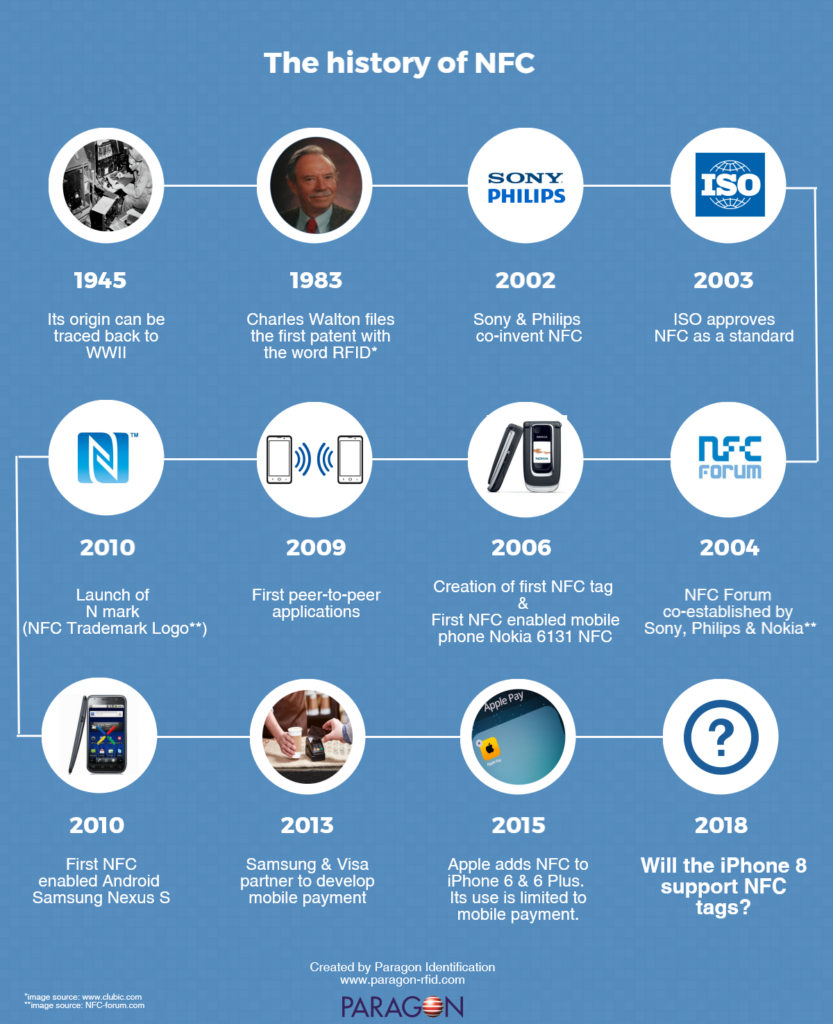 NFC applications are multiplying but not all smartphone users can enjoy its benefits. To this date, iPhones are still unable to support NFC tags. Back in 2004, Apple added NFC capabilities to the iPhone 6 and iPhone 6 Plus to support the Apple Pay mobile system but so far the NFC function of iPhones is still limited to contactless payment.

Rumour has it that the iPhone 8, which is due to be released in 2018 (TBC), will support NFC tags. This is making a lot of noise on the market and for all the right reasons. If Apple does make this move, NFC’s expansion and adoption rate will be even faster.

Leading RFID labels manufacturer, Paragon also specialises in NFC tags, in the form of labels, tickets or cards. Contact us now to discuss your project.